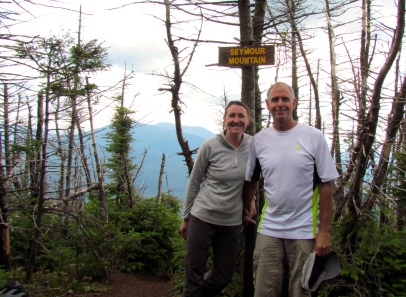 Seymour Mountain is one of the four Adirondack 46ers in The Seward Range. You can hike it alone or as a combination with the other three; Seward, Donaldson, and Emmons. We elected to do it alone and save the other three for another day.

The trailhead off of Corey’s Road is easy to find, and it leads to a level and marked DEC trail. The path follows private land, and to your left, you’ll notice recent logging activity there. It is a pleasant walk in the woods, not your typical Adirondack trail, you can actually walk without looking at every step you take and enjoy the lowland woods. 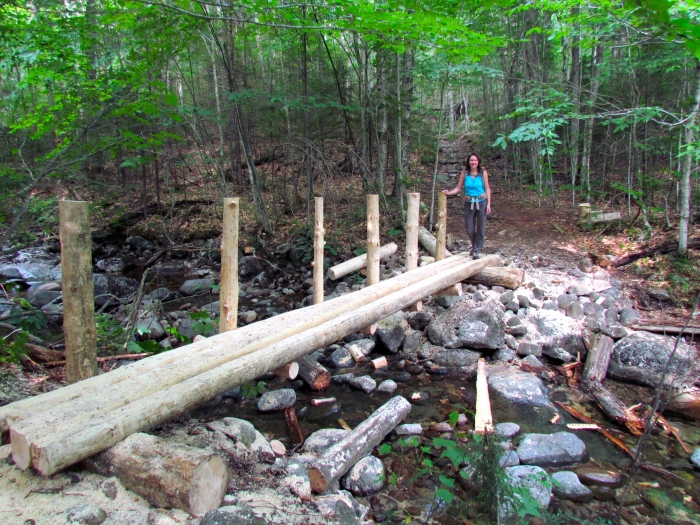 Ginette was appreciative of the newly made bridge — “it’s so freshly built the sawdust is still kicking around!” 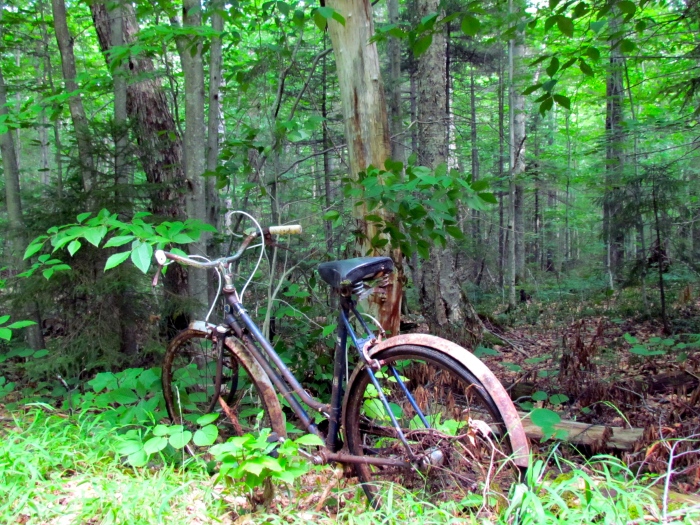 An abandoned bike we came upon on the trail.

After about an hour and a half of walking, you will reach the Blueberry Lean-to and just passed it, a gravel road. Soon you will see a rock cairn marking the herd path to Seward, Donaldson, and Emmons. Continue walking on the road until you reach Ward Brook Lean-to and 200 yards past this shelter you will see the second cairn for the Seymour Mountain herd path adorned with an old blue pot.

The cairn marking the unmarked trailhead to Seymour Mountain

The herd path follows a brook for a quarter-mile of and then gets moderately steeper through the forest. Suddenly the elevation change will be upon you, Seymour welcomes you with a steep mile of scrambling rocks, root and tree hugging and boulder hopping. 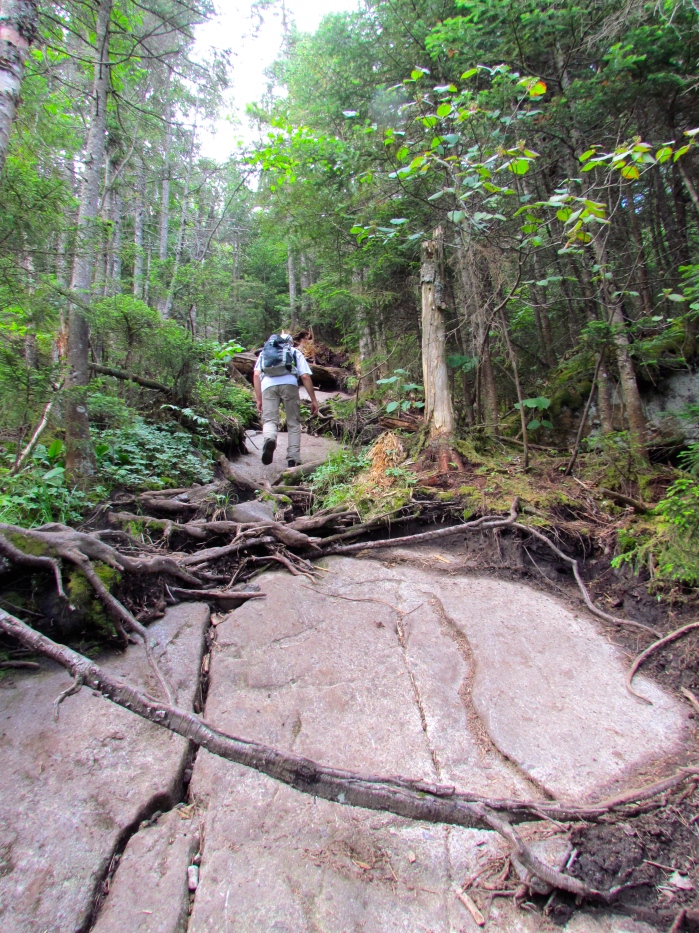 A hundred yards before the summit, there is a ledge with a high rock outcropping offering an ideal place to take photos of the other Seward peaks, Ampersand Lake, and Ampersand Mountain.

Moments like this, up high in the Adirondack wilderness, is what we hike for!

Looking up at the ridge.

Following the false summit, you have a last little climb to Seymour Mountain. From the peak looking south-east, you can see the Santanoni Range and in the distance the Adirondack Great Range.

Ginette and I were fortunate to hike when the conditions were dry, and the fabled Seward mud was virtually non-existent, it was a challenging but pleasant eight-hour day with plenty of rest stops and breaks along the way.

Having completed Seymour Mountain the previous week, that hike accomplished two things, Seymour obviously and scouting the trail for the remaining three peaks; Seward, Donaldson, and Emmons. I had done a bit of research about the unmarked trail, but since we knew where the herd path up Seward was, we decided to go that route.

The turn off up Seward is about 3 miles past the Blueberry Lean-to and follows a brook at a gentle climb and then ramps up through roots and mud. Then the trail turns just plain ugly, especially after a week of rain — more mud, rocks, and boulders, mangled roots and steep to top it off. 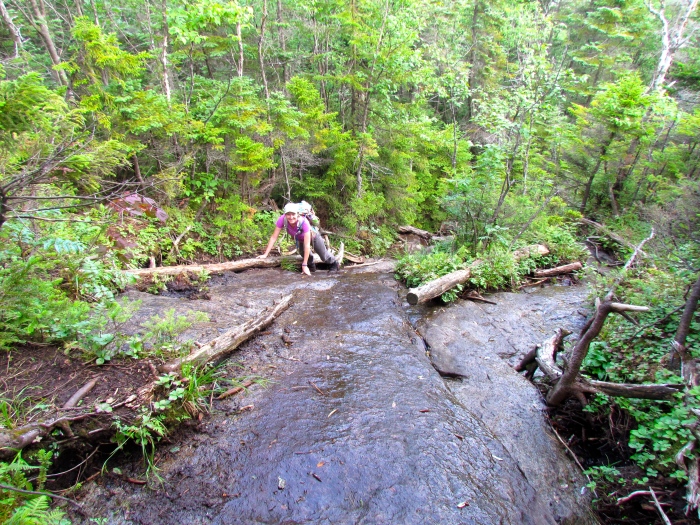 This goes on for what seems like a long time (1.5 miles) before you reach a ridge and the final ascent to Seward. At 4 347 ft ( 1 325 m) and the highest of the Seward Range, the peak was somewhat of a letdown, not much of a view but we were thankful to be there.

Seward our first peak of the day!

After a very short break, we continued on to Donaldson. The trail begins with a rugged descent to a col between Seward and Donaldson and a nice walk through a coniferous forest before climbing back up to the summit of Donaldson. The views are better on Donaldson, you can see Seward in the rear view mirror and the daunting peak of Emmons in the distance.

Our packs taking a break on Donaldson summit.

Ginette lamented, “We have to go that far, why are we doing this?”

The trail over to Emmons is easily the most pleasant part of the hike, a bit of mud, nothing too extreme, up or down, and before you know it you’re standing on the summit, about nine miles and six hours from the trailhead at Corey’s Road. 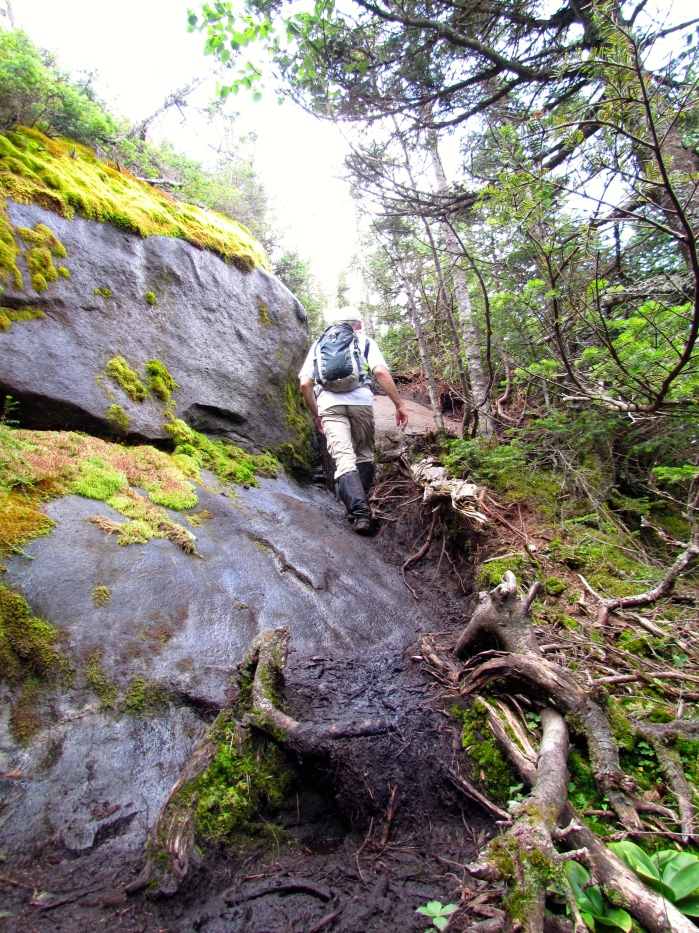 Yours truly from the southernmost peak of the Seward Range, Mt Emmons.

Tired but proud we headed back to Donaldson. Ginette was in the lead and just passed the peak of Donaldson she headed down a trail that I did not remember.

Not recognising this trail I asked, “did we come up this way?”

“Oh yeah, I remember this, we passed this tree…” she replied.

I sensed we were heading in the wrong direction but had a feeling it was the Calkins Brook Trail which I had read about. Apparently, it’s easier than going back over Seward and down the way we had come up. After about ten minutes I took a compass reading and confirmed my suspicion that we were heading due west, down the Calkins Brook Trail which would intersect with the DEC trail that would take us back to Corey’s Road.

I let Ginette sweat it out a bit once she noticed to be leading us down the wrong path. Eventually, I confessed knowing exactly where we were.

In contrast to our hike up, this trail was a pleasure to walk out on, soft pine needles, very few rocks, and roots but a steady descent which was a workout for the legs.

Once on the DEC trail, it was an easy walk back to the car. Ginette’s wrong turn was a blessing in disguise. It had taken us six hours to reach the summit of Emmons going the hard way over Seward and Donaldson but only slightly under three hours to get back out.

7 thoughts on “The Adirondack 46ers Series: The Seward Range”