Two years ago we became empty nesters. Lake Placid, New York soon became one of our favourite getaway destinations given it’s only a three-hour drive from Brockville. On one of our weekend excursions, we found ourselves driving, stopping here and there along the roads, taking in the sights, enjoying the beautiful fall colours.

Depending on who you ask, Ginette or Gordon, one of us will claim being the one who suggested, “We should go for a walk, it’be nice, we’re spending too much time driving around.” Regardless of whose idea it was, it was early, so we decided that a nice walk before breakfast would do us some good.

Looking for a place to start, Gordon saw a sign for the Adirondack LOJ along Route 73. After driving along in the ‘pointed direction’ for about ten minutes, we noticed many cars parked at a turnoff called South Meadows. We parked too and quickly inquired why. Further ahead was the Adirondack LOJ club and the parking area was full, but that we could walk from here. Curious, we ventured out!

Fall view from the road leading to the Adirondack LOJ

Following along the road we reached a trailhead, which seemed like a good place to start. The well-travelled path made for an easy walk, and no more than 45 minutes later we had reached Marcy Dam. The dam that crossed over Marcy Brook was gone, Hurricane Irene and the ten inches of rain dumped in the high peaks had caused a flash flood and swept it away. From the dam, we had a choice of many trails. Several people were around so we asked someone, who seemed like a knowledgeable hiker, where we should go. He pulled out his map and suggested we continue to the Phelps trail. It would be the shortest hike up a mountain in the area.

We took his advice, and soon after the turnoff towards Phelps we started climbing. The grade was gentle at first, following a brook through the woods. Twenty minutes in the going got tougher, the trail was a jumble of rocks, tree roots, and mud holes. It was walkable, but you had to watch every step. After an hour, we started to get tired and wondered what we’d gotten ourselves into. The mountain just grinds you down, and you have to keep on.

We didn’t have our camera that day, but the trail would have looked something like this.

Eventually, we started making our way out of the dense woods and were nearing the peak … or so we thought. Still, we climbed and climbed. But the trees were getting smaller and just like that, we were at the top, an open outcropping of stone with views to the south. It was spectacular.

Ginette might have been a tad cranky. The hike hadn’t been the short trek she’d anticipated, so we quickly headed back down. With gravity’s help, we moved along, bounding down the hill and the descent was much easier.

Back at the van, we checked the time — it was 3 pm. We’d spent six hours in the woods! A little late for breakfast, we headed back to town thirsty, hungry, sore and tired.

Little did we know, we had just climbed our first Adirondack 46er., and we were hooked!

Two weeks later we came back for more. Armed with our water bottles and new hiking poles we approached our second climb. At this point in our aspiring 46ers career, we were still unaware such a group existed. Cascade was chosen primarily for its convenient location — the trail head is located just off the highway Rt. 73.

This trail is a very popular hike, the round trip to the top is less than four hours. You’ll immediately scramble at a steady climb through the hardwood forest on a rocky but well-worn path. It was wet, and we got dirty, but we were having fun.

Ginette loves it when Gord stops for photos — a perfect opportunity to catch your breath.

An hour of steady climbing, passing out of shape hikers, huffing and puffing ourselves, we reached the top. Coming out of the woods onto the bare rock is a real challenge in perception, especially for us as this was our first bald summit. 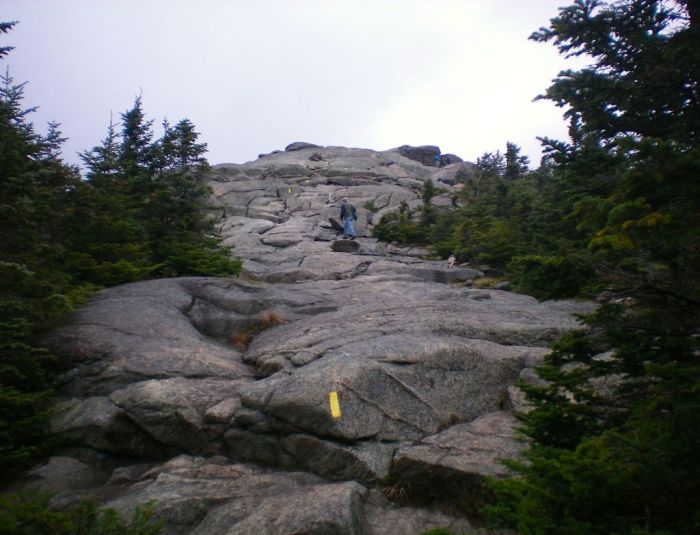 With wobbly legs, we scrambled to the top, noticed the frozen puddles on the rock, took in the 360-degree views from Cascades ‘bald top’ and headed back down to get out of the cold wind. 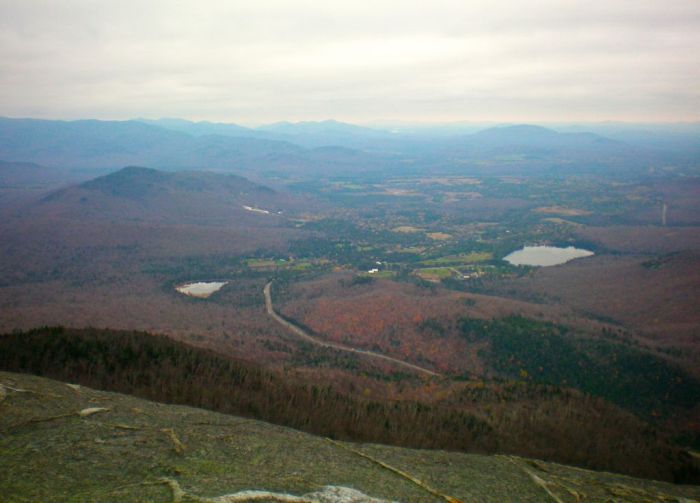 It doesn’t matter that Cascade Mountain is probably the easiest of the 46 peaks to climb, no. 2 of 46 was in the bag!

2 thoughts on “The Adirondack 46ers Series: Phelps a Peak Performance”