Set between the High Atlas Mountains to the West and at the gateway to the Sahara desert to the East, Ouarzazate has hosted Dynasties, Emperors, Ancient world rulers, and us the Whites.

In town, we were solicited by locals to be our private tour guide, and since January is the off-season, we took one up on his offer of 20 dirhams (about $3 CAN ). He was both engaging and witty as he toured us around the old Medina, the Mullah, and the Kashba de Taourirt. 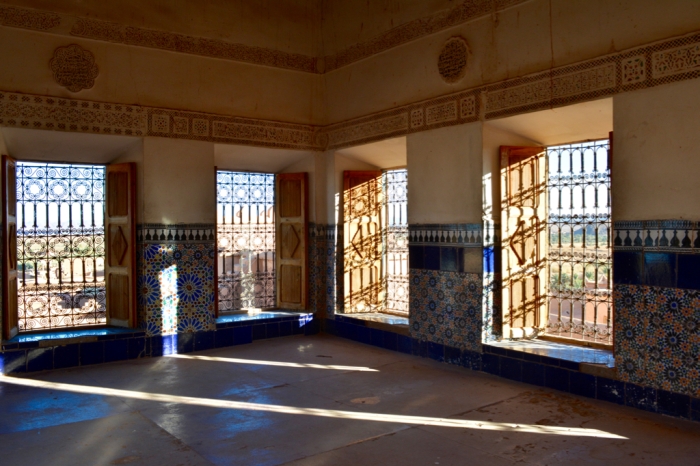 Later, he brought us to a building with a lovely entrance, and a rooftop for a ‘nice view’ of the city. Coincidentally it was the women’s collective where a collection of Berber rugs were for sale.

We politely declined to engage in the bargaining process, ‘We don’t need a rug!’ we said. ‘Maktub’ he replied, explaining that it was destiny that brought us here. Somehow, we left a few dirhams lighter and Gordon clutching a new prayer size rug under his arm. 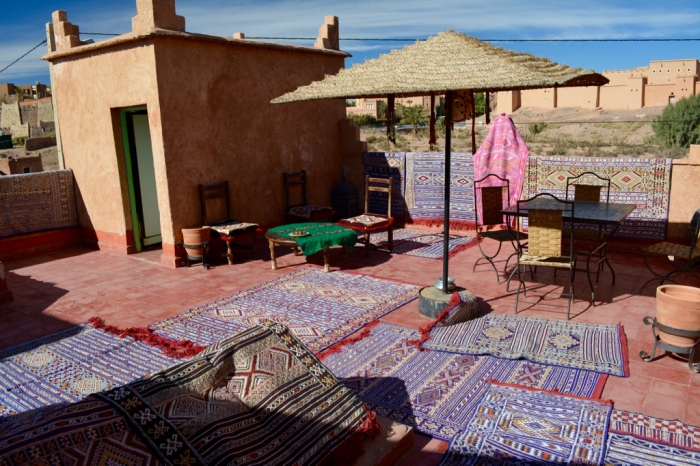 The next day, we vowed to stay away from any shopping temptation and headed to discover the world of cinema in Morocco.

The region’s ideal climate, excellent blue sky, and desert landscape has attracted movie producers to Ouarzazate since the 1950’s. Early productions in town and the surrounding villages include Ali Baba et Les 40 Voleurs (1954), and Lawrence of Arabia (1962).

In the 1980’s the cinematic industry continued to grow;

Today, with over 100 films shot in town, the movie industry has developed, including two major production studios, a museum of cinema, and a film school.

Neither of us had even been to a studio, so we visited Atlas Studios, one of the largest in the world which was created in 1983. 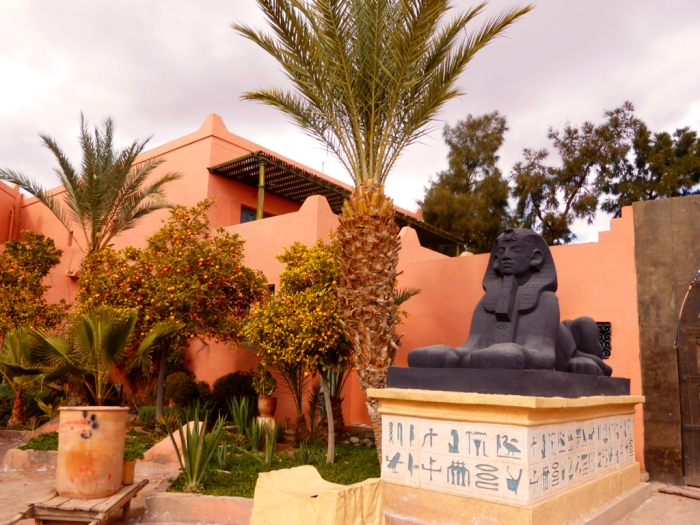 Although many of the sets are falling apart, they are continually repaired and updated to host new productions.

The more recent ones were very true to the setting they recreated, and it’s easy to imagine yourself in the midst of Cleopatra’s Temple, a Roman Forum or the streets of Jerusalem. 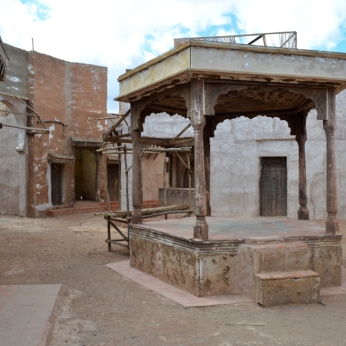 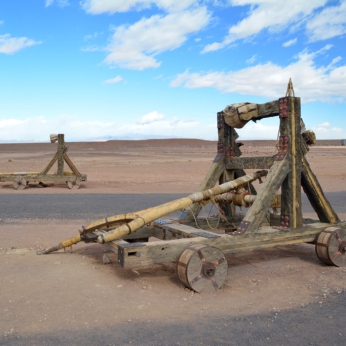 Our tour ended on a sour note. We try not to be negative and go with the flow, but sometimes we feel we are expected to be an ATM.

On arrival, the reception staff had asked us to wait a few minutes as the guide was having lunch. We did, then toured for about an hour, and as we finished the guide extended his hand asking, “what about me?”. His expectation annoyed us.

Since the entrance ticket clearly indicated, ‘Guided Tour’, we logically assumed his service was included in the fee. After a short discussion with Atlas Studios staff, we were informed that tipping is at ‘visitors discretion’ and that guides do not receive any compensation from the company.

Gordon gave our guide a small amount, but we can’t help but feel that Atlas Studio is exploiting the guides for its financial benefit.

Ouarzazate will appeal to movie buffs, but there is not much else to see in this sleepy city. The many kasbahs dotting the valley’s villages and the surrounding mountains are the real draw as you tour Morocco.