Moving on from Ouarzazate, we left in a Grand Taxi; a collective seven-seater minivan that leaves when full. Our intent had been to travel by bus, but on the day of our departure, they were not running. Heavy snow in the passes of the High Atlas kept them on the western side of the range.

We arrived in Tinghir where it didn’t take long to make a new ‘friend’, Ismael. He wanted to welcome us to his beautiful country, point out the sites of his city, and coincidentally sell us his bijou.

In his shop, over a cup of Berber tea, we chatted and admired his artwork.

“Thank you, we’re travelling light and don’t need any jewellery, but we’re thinking of hiking tomorrow.”

A strategically placed phone call by Ismael, and shortly after his ‘friend’, Hassan, a local mountain guide joined us for tea.

We negotiated a fee, and the next morning we met him for a day of trekking in the high plains above the Todgha Gorge. It was an easy ride by taxi, only 15 km from town.

From the entrance, we walked through the impressive canyon with imposing red walls towering some 160 meters on each side, and as little as 10 meters wide at the narrowest point.

Out of the gorge, we began our hike. The climb up was relatively easy, gaining approximately 400 meters before coming down over the mountain pass, offered stunning views all the way.

We shared the path up with women, children and donkeys going in the opposite direction, down to retrieve water from the natural springs. They are the Amazighs, ‘the free people’ or indigenous of North Africa. 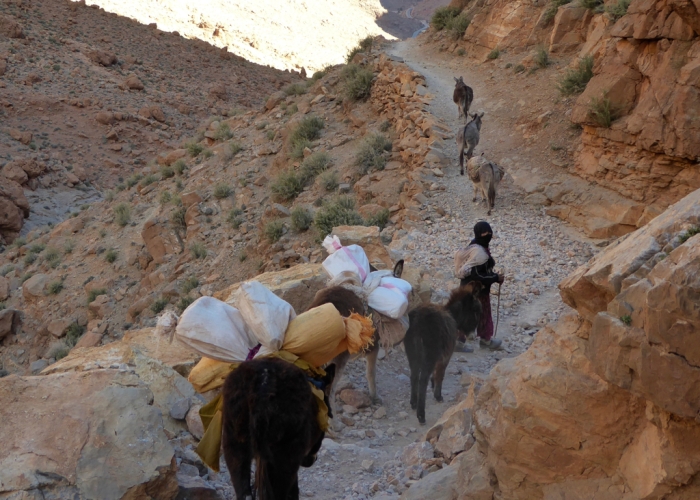 They make the trek every couple of days to load up water bottles carried by their beasts of burden. Excess water is stored for later use in a cache on the mountainside.

Hassan introduced us to a Berber family who has a permanent homestead in the rocky terrain. We had a peek at their lifestyle; a hard one subsisting on the bare essentials.

We joined the Berber man on one of the tattered rugs spread out on the ground while one of his wives, seemingly shy prepared a tea of thyme for us in one of the caves. Her work done, she retreated to another cave to continue her daily activities.

The camp was a combination of eight man-dug caves, a large makeshift tent, and stone animal enclosures.

Each cave serving a purpose such as socialising, sleeping, and cooking.

As we left, we watched him return to his pestle and mortar to pound seeds into flour.

We made our way back down the arid slopes, towards the village near the mouth of the gorge. 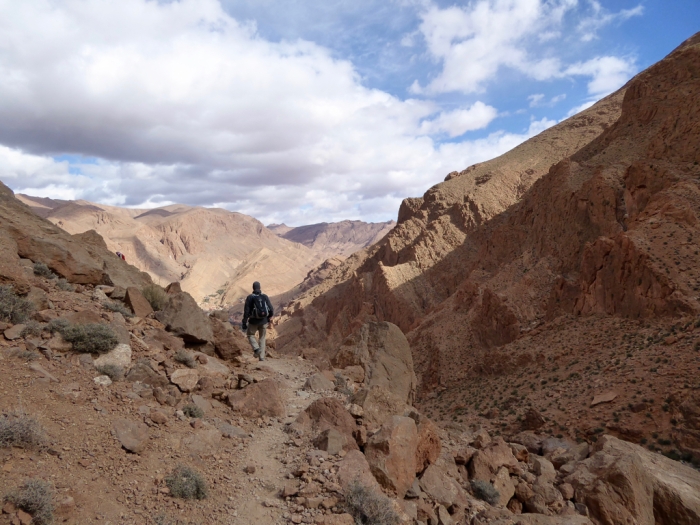 Near the town, rocks cover an unmarked grave, one of the many resting places in this mountain cemetery.

At the valley floor, wedged between two mountain ranges is an undulating oasis covered in palm trees, spreading out over 30 km in the region.

Through the sun and shade of the palm groves, we meandered back through the carefully cultivated family plots which are passed down through the generations. Date palms grow abundantly here and provide a harvest of sticky fruit.

Our day was pleasant, and it was nice to be in the mountains again. Combining a hike with a visit to the Todra Gorge and meeting a Berber family has been one of the highlights of our Moroccan travels.

9 thoughts on “Todra Gorge and the High Plain Nomads”