We’ve been on the road for six months now, and South Africa is the first country where we’ve felt the need to be hyper-aware.

Our first stop was Cape Town, and as expected, it is a stunningly beautiful city worthy of its high accolades. What we didn’t expect was the constant reminders from taxi drivers, reception clerks, friendly waiters, and total strangers to be ‘SAFE’. We were told that muggings and violent crimes are rampant. White tourists are prime targets. We were even discouraged from taking public transportation, at the very least, only during the day.

Security guards man entrances to grocery stores, laundry mats, to roadside parking lots. During the day, access to small businesses and local restaurants have locked wrought iron gates, and you need to buzz to get in.

Outside of Cape Town, we were instructed with similar comments, “The front door locks at six, make sure to be back by then!”

So it goes to say that travelling around was a bit unnerving. Unlike our movement in South America where we used local transport, we went by Uber from our hotel to desired destinations and back. Once the sun set, we mostly stayed indoors.

A night out in Observatory, playing pool at Stones. 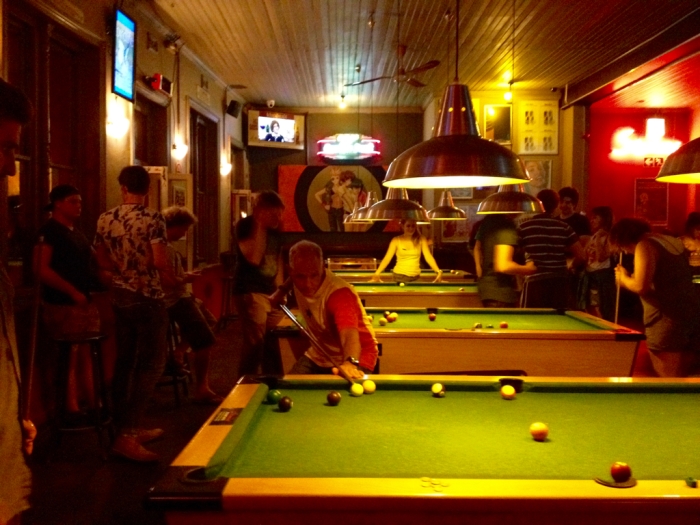 Whether this fear instilled in tourists is justified, we can’t say for sure. We don’t have statistics to support it nor will we research it. But we can tell you, after three weeks travelling in South Africa, the country’s past history can be felt everywhere. There is an uneasiness that lingers in the air.

Most travellers will only glimpse at the poverty from a car or bus window. Bordering the highways, you can see densely built communities hidden behind continuous fences that spread out over lengthy distances on the outskirts of towns. These slums or ghettos are referred to locally as townships.

That being said, we can see Cape Town’s appeal, and we enjoyed the cosmopolitan ambience of the city, it’s trendy Victoria and Alfred waterfront restaurants, and a day trip to the nearby wine country.

When it comes to wine tasting, it is best to hop on an organised tour and leave the driving to a prudent guide. We joined Wine Flies and our knowledgeable guide, Ian for a visit through Stellenbosch, stopping at five vineyards of the region with a diverse group of people from, Brazil, Russia, England, Norway, and the US.

In beautiful surroundings, we shared glasses of wine with our new friends, wine pairing with locally produced cheese and artisanal chocolate, and a delicious African Braai. What a barrel of fun, and we found the South African wine superb and very reasonably priced.

No visit to Cape Town is complete without seeing the stunning views from the New 7 Wonders of Nature. There are numerous routes up Table Mountain, including taking the Cableway. In the company of Dutch friends, Nadia and Tom from our hostel, we elected to hike up the Platteklip Gorge trail. Two and a half hours later after leaving the trams parking lot, we reached the top, and were treated to fabulous views in all directions. 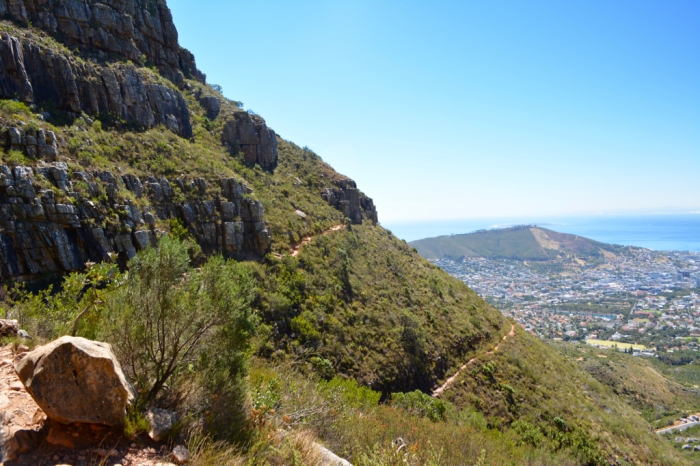 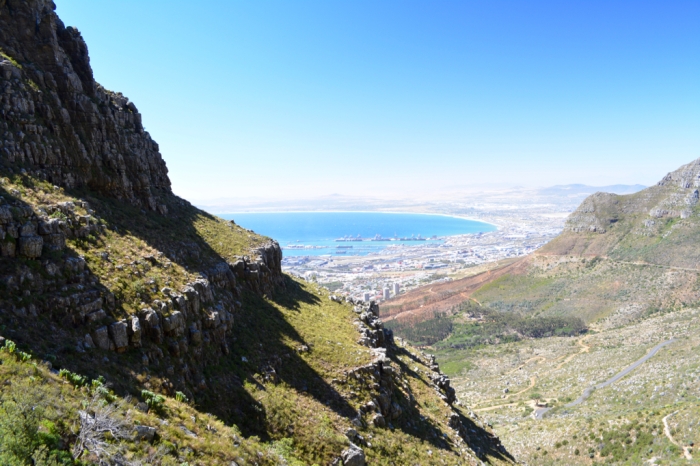 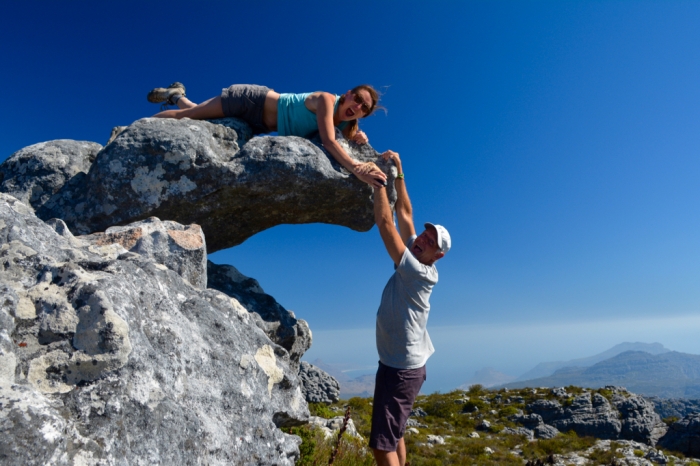 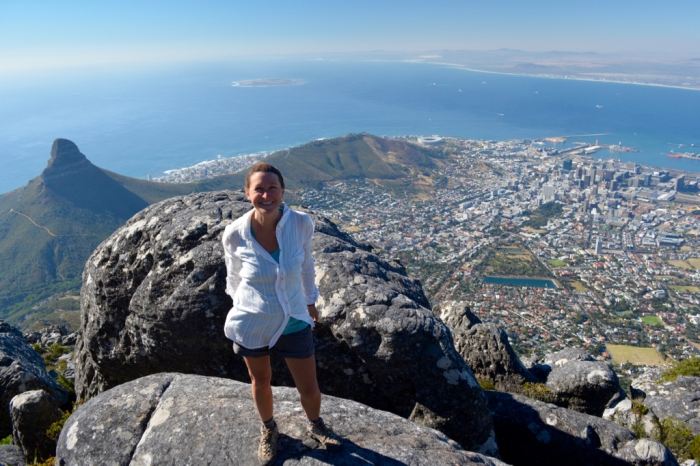 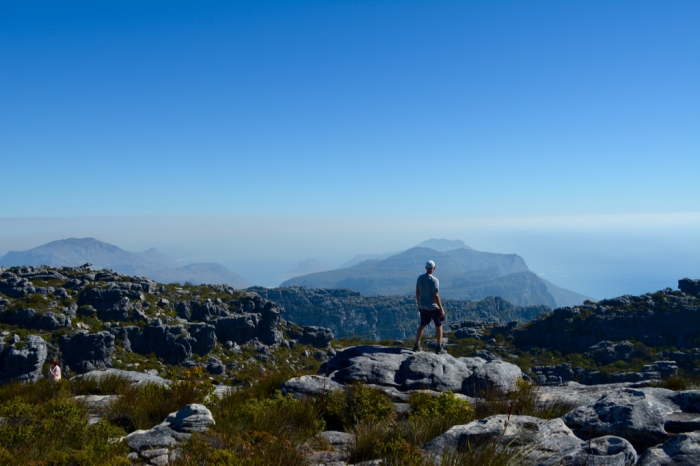 Cape Town has many sides, but we didn’t expect it to be so affluent. Evident in the white neighbourhoods that expand out from the City Bowl towards the slopes of Table Mountain; full of German cars, million-dollar condos, gated communities, fine retail outlets, and trendy bars and clubs. 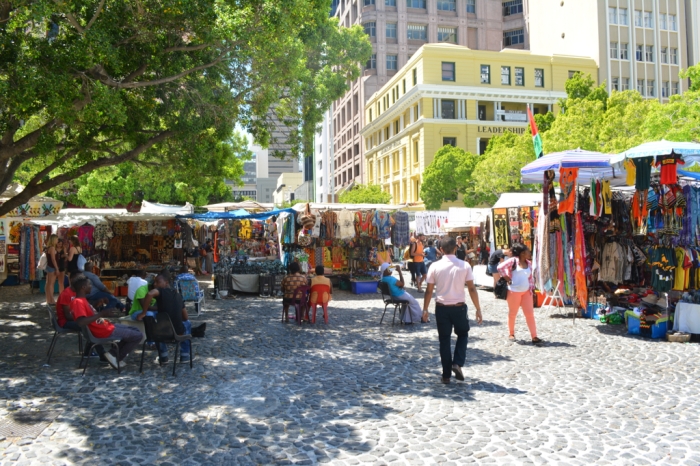 Sending LOVE to South Africa, on its long road to equality.
Peace out!

6 thoughts on “Cape Town: A Tale of Two Cities”