We were at the Upper Works parking lot before dawn and by the light of our headlamps. The morning was cool and dry as we set out mentally prepared for a long day. We fell in step moving forward at a brisk pace, and by daybreak, a clear sky promised a beautiful day ahead.

Our route took us along a rolling gravel road, through the marked DEC trail (Bradley Pond / Duck Hole) before we arrived at the Santanoni Brook. The wooden bridge was broken and crossing the water appeared safer by rock and boulder hopping. With the river behind, we continued on referring to our notes to ensure we kept to our planned route.

We arrived at a fork in the path marked by a large cairn with an ‘S’ etched on one of the rocks — the turn to Santanoni.

This is where the unmarked trail starts. The herd path was well used and easy to follow, and so we stopped looking at our notes and climbed on. From here we knew we had approximately two miles at a steep incline before we would reach what hikers refer to as “Time Square”, an open knoll and our next destination. From this square herd, paths lead in three different directions to the mountains that make up the Santanoni Range.

We ascended over very steep eroded terrain for longer than we anticipated. Suddenly the trees opened up, and we had our first view of the day. 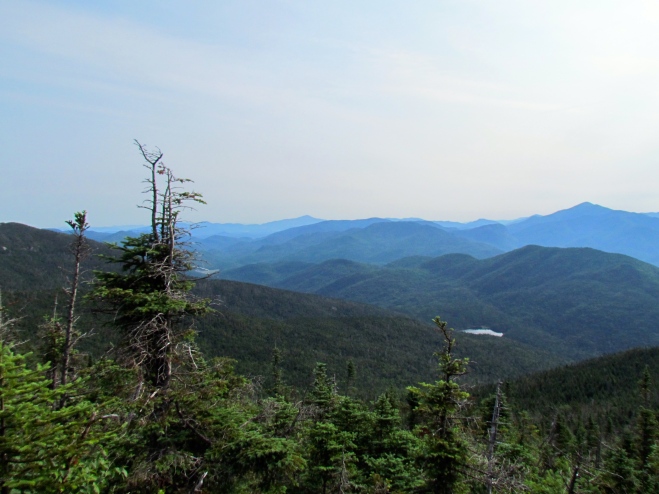 First view of the day hiking the Santanoni Range

Past the ridge, we arrived at a large rock outcropping, and to our surprise, we saw the familiar signpost with yellow letters announcing Santanoni Peak.

“That was a breeze, Santanoni already!” 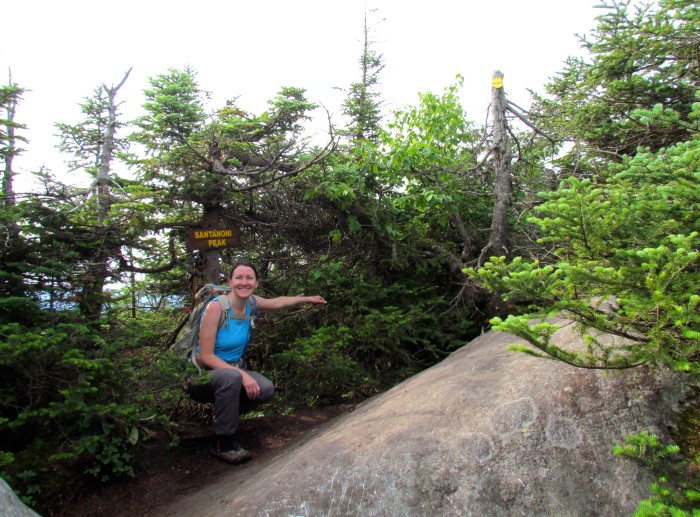 And then confusion set in. We had been looking for Time Square, “we must have passed it!”

From the knoll, the summit of Santanoni is a one-mile distance with a 400 ft elevation gain. With that knowledge, we backtracked down the way we came looking for the square.

We had descended quite a bit before Ginette mentioned a recollection; reading from an on-line forum of Aspiring 46ers about someone inquiring, “Did you go up or down Santas Express?”

Checking our map and compass confirmed what we suspected, “there has to be another trail up to Santanoni.”

We had taken the wrong way up, “The Santanoni Express Trail”, and needed to reverse back up.

Fretting, Ginette exclaimed, “what, you want to climb that steep part up again? Good God, Gord I can’t do this!”

“There is no shame in failure; only in quitting!!” Gordon quipped back. “Do you really want to have to climb this again later?”

So we turned back up a second time up the steep part of the trail to the summit of Santa. At the top, we found the herd path leading towards the knoll. Reaching Time Square gave us a renewed determination and on towards the dreaded Couchsachraga we pressed on.

There are three things to psych you out about Couchsashraga:

1 – Couchsachraga is an Algonquin Indian name meaning “dismal wilderness”. ‘Couch’ is an isolated, desolate peak in the Adirondack wilderness, why would you even want to approach it?

3 – This peak is considered the wettest of the 46ers; you need to cross a large soggy and muddy bog before climbing the summit. A wrong step and you are knee-deep in guck. 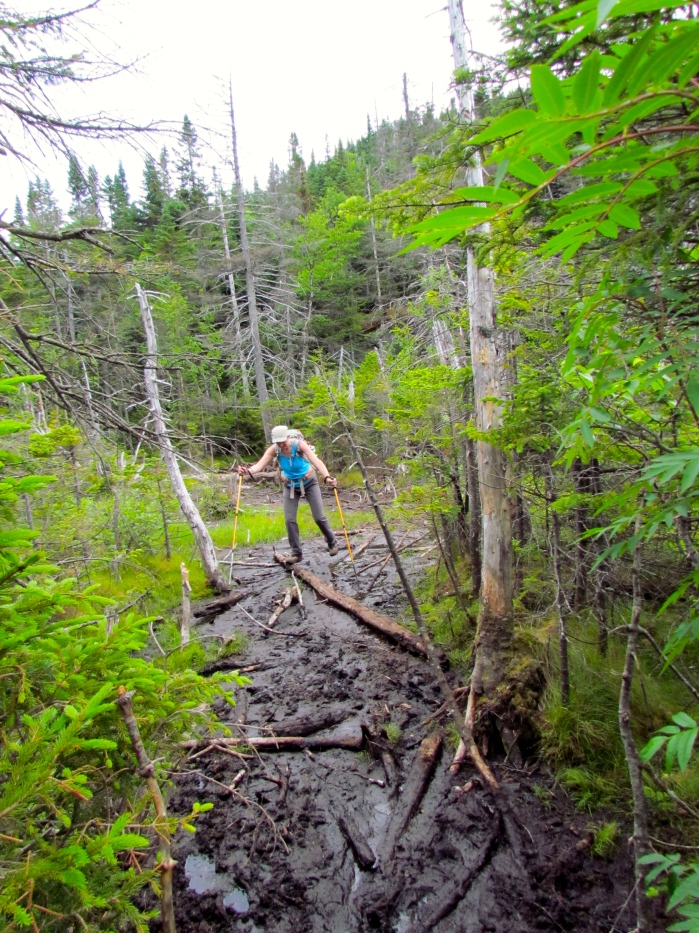 The dreaded bog was much drier than we expected.

Couch is a 2.8 miles round trip (4.5 km). Even though you descend 870 ft to the swamp and need to ascend the other steep side to reach the summit, we really enjoyed our walk to Couch as it got us closer to our 46ers goal.

After our long day and for a small effort Panther Peak delivered a great reward. The short up and down to the summit took less than 15 minutes. Panther Peak has a softly rounded bald top with 360° views of the regions where we rejoiced in our perseverance.

and over this way Santanoni Mountain.

Leaving Panther Peak, we descended along Panther Brook, the trail we’d assumed being on in the morning. In contrast, our stride was now sluggish and unhurried as we slowly progressed back to the car basking in pride of our day’s achievement.

Santa, Couch and Panther took us 14 hours including retracing our steps up and down Santa’s Express.

One thought on “The Adirondack 46ers Series: Santanoni Range the Express and Hard Way”